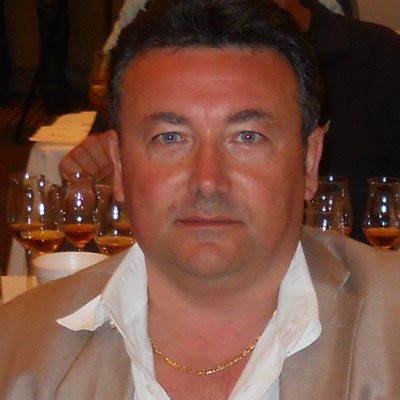 Former restaurateur, AIS Professional Sommelier since 1998, today he is a commercial consultant in the world of wines, champagnes, spirits in particular specialized in the rum scene. It promotes targeted matching and tasting evenings at restaurants and bars, themed masterclasses and active in the selection of barrels of rum on behalf of some independent Italian bottlers. He was a member of wine tasting commissions for the Consorzio Vini di Romagna and for the guide “La Romagna da Bere”. Author of the book “The great rum book” edition 2014 and 2019, and the book “Il Grande libro dei Rum -World icons of rum” of 2020. He has been writing articles on wines and rum for 20 years for different newspapers.

Winner of the Best AIS Sommelier competition of the Region in 2005 and runner-up in the Best Sommelier Italia AIS competition 2009, he participated in the selections for the competition as best European Sommelier WSA. Judge at the Show Rum Roma Italian Festival of 2016, 2017, 2018 and 2019, Berlin German Rum Festival 2018, Miami Rum Festival 2014, Madrid International Rum Conference of 2014 where he collected the award as “Mejor labor educacional en el mundo del ron dell anjo 2014” in reference to the first edition of the rum book.