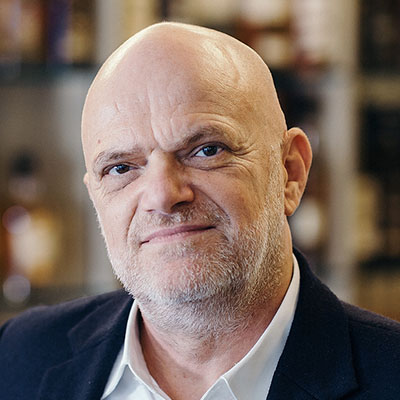 lready in his early ages in 1978, working as a Bartender in the legendary “Johns Club” in Garmisch-Partenkirchen, Austrian-born Eugen Kasparek explored his passion of high proof spirits. In particular, Rum and Whisky, two spirits of very distinct processes but old traditions, which had caught his interest.

This passion as well as his professional competence, are a result of various experiences having worked internationally in the hotel business, bars, premium-class gastronomy, a party service as well as retailing delicacies and spirits.

Creativity and Innovation were always important to him, and it is therefore not surprising that already in 1983, at the age of 25, he invented and implemented the culinary concept of the restaurant Nagel’s Deli, which is well known even beyond the country of its origin.

By the mid-80’s he worked as one of the first exclusive and self-employed event consultants in Germany.

Since 1997 he pursues his true vocation, the sensory analysis of exceptional distillates and its trading in the Berlin-located retail shop Whisky & Cigars.

His greatest passion is R(h)um, which led him to establish a new form of awareness for quality and goodness.

With his long-lasting experience, his extensive knowledge and sensory abilities he represents Whisky & Cigars as a Master of Tasting, and is well known and recognized among international experts. His legendary tastings were attended by more than 50 000 participants, promoting his reputation as an excellent spirits connoisseur. He forms part of the jury of the “German Rum Festival Berlin”, works as an author for specialized magazines and established publishing companies and has worked for the international auction house “Auctionata” as an appraiser and expert for whisky and rum.

His curiosity and interests have led him to many countries in the world. Besides Asia and the Caribbean he has travelled the Orient, USA and certainly Europe – always willing to discover culinary delicacies, but most importantly looking for manufacturers of delicate beverages and spirits.

One of his career highlights was certainly his participation as the protagonist in an episode of the documentary series “Europa hochprozentig” (Europe high proof) by ArteTV and SWR.